On June 30, the entire world observes Global Asteroid Day. The United Nations has sanctioned this day as World Asteroid Day to increase public awareness on the massive impacts of asteroids on our planet. Observing this day is significant as it is a way of educating the masses on the potential risks of asteroids as well as the opportunities in this field.

The co-founders of World Asteroid Day were Rusty Schweickart (Apollo 9 astronaut), Grig Richters (filmmaker), Danica Remy (B612 Foundation President) and Dr. Brian May (reputed musician and astrophysicist). The intended to spread knowledge to the general public about the important role asteroids played in the formation of our solar system. Why is June 30 observed as World Asteroid Day? June 30 witnessed the biggest incident of asteroid impact on our planet till date.

Asteroids and space elements have always captivated the inhabitants of earth. Space-themed movies always attract the audience to the theatres. So, these have been a recurring theme in many super-hit movies. Here are some of the most entertaining films to watch on this genre on World Asteroid Day 2022: 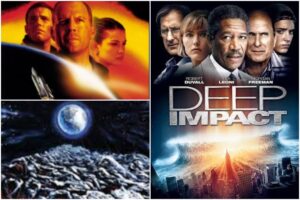