Yes, you heard us right! Ranbir Kapoor and Alia Bhatt are counting days to bring home their first baby and fans couldn’t be more excited! The actress shared a special post on Instagram on 27th June, Monday, to announce her pregnancy.

After a romantic courtship of five years, Bollywood couple Ranbir Kapoor and Alia Bhatt tied the knots at Mumbai three months ago (14th April, 2022) in a private ceremony surrounded by family and friends. Now the duo is all set to step into another exciting chapter of their life – parenthood.

Elated as they are, Alia Bhatt couldn’t resist sharing the happy news with her fans. The “Gangubai” actress took to Instagram to post a picture that says it all. In the picture, she is smiling with her eyes on the monitor as she undergoes sonography. The monitor is covered with a red heart emoticon, symbolising a mother’s unconditional love her child. Alia Bhatt didn’t want her dear fans to keep guessing. So, on the same post, she wrote, “Our baby ….. coming soon.”

Her darling hubby was also of course in the photo, sitting next to her during the ultrasound with his eyes glued on the monitor. As per our sources, Alia Bhatt has been going for regular checkups and all tests reports are normal. 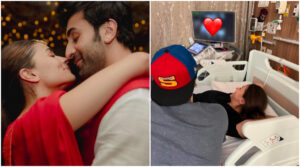 Soon after Alia Bhatt shared the adorable post, fans expressed their joy in the comments section and thanked the couple for this delightful surprise. Bollywood celebs, friends and relatives also wished them all the best for the rewarding journey of parenthood. Karan Johar wrote, “Heart is bursting”, along with some heart emoticons. Soni Razdan, Alia’s mother, commented, “Congratulations Mama and Papa lion.” Actress Mouni Roy, who has worked with Alia and Ranbir in their upcoming film ‘Brahmastra’ wrote she was “Immensely happy.”

On the work front, Alia Bhatt was last seen in “Gangubai Kathiawadi” by Sanjay Leela Bhansali. Her upcoming movie is “Bhahmastra Part 1: Shiva” which is also her first movie with Ranbir Kapoor. The “Barfi” actor, on the other hand, is preparing for his next movie “Shamshera” with Sanjay Dutt and Vani Kapoor. The film will hit the theaters on 22nd July, 2022.