Standing for long hours and complaining about the unending queue and insufficient toilet facilities has almost become a British tradition. Yes, we are referring to the famous queue to buy tickets for the Wimbledon tennis tournament in Britain. Such is the craze for the Wimbledon tournament that people stand in the sweltering heat and the pouring rain to get their tickets. But seems like fans have had enough and they couldn’t help addressing the futility of the entire process.

Since the outbreak of the global pandemic, after a wait of two years Wimbledon Tennis Tournament returns to its full capacity in 2022. Wimbledon 2022 has already started and the first day witnessed people standing in line for the tickets 48 hours before the counters opened. The stadium has a capacity of allowing nearly 42,000 people per day. 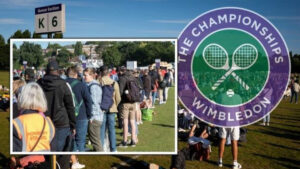 Fans took to social media to complain that the worst thing about the most-loved Tennis tournament is definitely the ticket selling system. @Tomteton2 took to Twitter to express his frustration: “It only shows that Wimbledon still has an outdated and backward ticketing system.” He further added that in 2022 fans should protest against the torture of spending hours to purchase tickets for a match while the entire process could be conducted smoothly through some app.

It’s 2022, the age of digital revolutions. Isn’t it supposed to be easier to buy tickets through an online platform – like everything else from attending a virtual college to paying all our bills online? That is a question only people of Britain can answer.