With headquarters in Gurgaon, Zomato is the leading food delivery chain in India. On Friday, June 23, the company’s shareholders have confirmed the acquisition of Blinkit. Blinkit sees this acquisition as a blessing as the startup company was struggling to raise funds from existing as well as new investors for several months.

As per data shared by Tracxn, the total amount raised by Blinkit so far is $692 million, from multiple investors like DTS Global, Japan’s Soft Bank, and Tiger Global. Zomato presently holds 9% shares in Blinkit. As per the deal, Blinkit’s shareholders will get nearly 7% at 70.76 each share in Zomato.

Last year, Grofers, the Soft Bank-backed company, shifted to instant delivery. In the beginning of 2022, Blinkit had to shut down several of its stores and stop its business in many cities. The motto was to deliver the order to the customer’s doorsteps in 10 minutes and the startup decided to not deliver in those cities where they were unable to keep this promise.

The association with Blinkit will benefit Zomato as well. Zomato will get a partner to expand its instant grocery delivery services – something that Zomato had earlier attempted to achieve in the past but failed. Deepinder Goyal, the chief executive of Zomato, opined the same: “Quick commerce has been our stated strategic priority since the last one year.” He further added that Blinkit is “synergistic with our (Zomato’s) core food business” making it certain for Zomato to emerge as a leading grocery delivery chain in the future. He further added that their governance process is strong and they are very cautious to avoid overpaying for the deal. He also informed that the transaction will close by August. 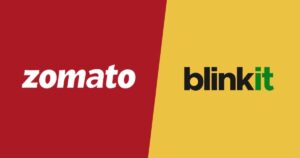 The investors of Blinkit must hold Zomato’s shares mandatorily for 12 months. In addition to Zomato’s shares, half of the shares those are attributed to the founder of Blinkit, Albinder Dhindsa, will be locked in for 2 years, while the lock-in period for the rest will be 12 months.

Saurabh Kumar, Blinkit’s cofounder, exited from the firm to begin a new venture last year. As he continues to be one of the company’s shareholders, it isn’t clear whether the lock-in period for Zomato’s share will apply to his stake as well. Shares attributable to Esop (Employee Stock Ownership Plan) of Blinkit will also be locked in for six months compulsorily.

In January, the first month of offering services as a quick commerce platform, Blinkit’s revenue was Rs. 22.1 crore. This soared up to Rs. 58 crore in May. The revue of Blinkit includes its customer delivery rates, marketplace commission, income generated from ancillary and warehousing services, and also advertisement revenue.

Currently, it is present in 15 big cities in India. Blinkit’s GOV at present is nearly 63% of the food delivery GOV of Zomato in Gurugram, Deepinder Goyal admitted.

Among Blinkit’s chief competitors is Instamart, a firm backed by Swiggy. Zomato came into picture much before Grofers or Swiggy, but in the private market, Swiggy’s valuation is more than two times that of Zomato. Deepinder Goyal is hopeful that despite high competition, there are great prospects of growth for Zomato as the Indian market is very large and expanding. In fact, Zomato’s growth in the past four years is prominent (CAGR of 86%) and the Ebitda margin has also improved to a great extent from 153% in the financial year of 2019 to 18% in the financial year of 2022.

Tax Planning- 2022: Smart Hacks to Save Your Tax