In India, July 1 is observed as Doctors Day 2022 by the IMA (Indian Medical Association), a day dedicated to our warriors in white. On this year’s Doctors Day, India will pay tribute to the medical fraternity by releasing an album titled ‘Dharti ke Bhagwan’, sung by Jharkand’s singer, Ajit Aman.

Doctors Day is a day is celebrated nationwide to acknowledge the sacrifices and contributions of the physicians who work round the clock so that people can live a healthy life. The first Doctors Day was celebrated in the nation in 1991.

After the outbreak of the global pandemic, the role of all healthcare providers have only become more challenging and our heroes in lab coats have toiled tirelessly to protect us from the deadliest virus.

In the words of the producer of the music album, Gautam Bharati: “Whenever there has been an epidemic in the country, then the doctors, who are called the Gods of the earth, have fought like warriors.” He further reminds the people that we lost thousands of doctors during COVID-19, who served the patients till their last breath. So, the song on Doctors Day is just a small token of gratitude towards the real-life heroes of the society to let them know that we care.

Ajit Aman, a famous voice in Bihar-Jharkhand, has sung ‘Dharti ke Bhagwan’. He has also sung another song to pay tribute to Ratan Tata, the business tycoon who has worked towards the development of India, and the song became quite popular all over India. 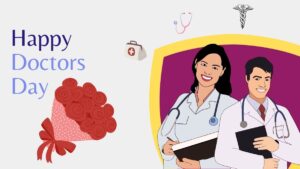 On Tuesday, the team has already released the Doctors Day album’s poster in Sakchi. Deepak Lakra, Ajit Aman, Dr. Gautam Bharti, Alok Raj Singh, and several others were present on the event. Dr. Gautam, the owner of Jeevan Jyoti Physiotherapy Centre and the album’s producer says he feels blessed to work with young people like Ajit Aman who uses music to spread positivity.

Many doctors from different cities will be seen in the video on Doctors Day, serving the ailing humanity. Ghatshila’s Avnish Srivastava’s role in preparing the video cannot be denied. He is the current chairman of a software company, headquartered in Bangalore. Manoj Pandey (the assistant director) and Surya Singh Hembram (the director) have said that at least half a dozen physicians from multiple cities will be seen in the video.