Renowned industrialist and Indo-Irish billionaire Pallonji Mistry passed away last night, June 27, 2022, at his Mumbai home. As Mumbai mourns the loss of the business tycoon, let us learn some key facts about the man and his achievements.

Pallonji Mistry was born in 1929 in a wealthy family of businessmen. The construction magnate was 93 years old when he died and was the father of four children. 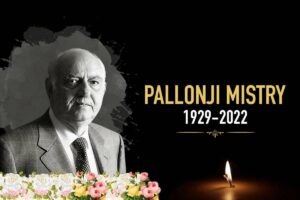 4. Pallonji Mistry received the prestigious Padma Bhushan, one of India’s top civilian awards, in 2016’s January. However, he gave up Indian citizenship in 2003 and has been and took Irish citizenship. So, the Mumbai-born was already an inhabitant of Ireland when he got the Padma Shree for his outstanding achievements.

5. If you want to know more about Pallonji Mistry’s personal and professional life, you can read his biography named ‘The Moguls of Real Estate.’ Written by Manoj Namburu and published in 2008, it is the real life tale of the successful personality.