The first guests that Karan will be welcoming on season 7 of Koffee with Karan are Ranveer Singh and Alia Bhatt. The trailer shows the three of them having immense fun as Karan encouraged the dynamic duo to reveal some Bollywood scandals and Ranveer couldn’t stop laughing as the newly wed Alia talked about her ‘suhaag raat’.

The brewmaster of Bollywood is back with yet another season of his most entertaining talk show: Koffee with Karan. Just like every other season, several of India’s favorite celebrities will grace the famous couch with their presence this year. The first A-listers to get the invitation are Alia Bhatt and Ranveer Singh and Karan seizes the opportunity to ask them some intimate details most fans had on their minds.

As Ranveer Singh and Alia Bhatt walked into the  room, Karan in his usual hilarious style introduced the actors as ‘newly married’ but ‘just not to each other.’ When triggered to share the biggest misconception people have about marriage, Alia said, “There’s no such thing as a suhagraat” as couples are generally exhausted after the big event.” The three of them will be seen having great fun playing games, dancing and gossiping only at Koffee With Karan Season 7, episode 1. 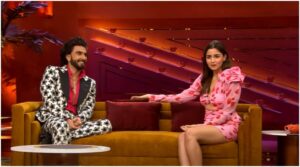 Posting the trailer on Instagram, the ‘Koffee with Karan’ host asked all viewers to brace themselves as Alia Bhatt, he himself, and Ranveer Singh prepare to serve the audience some steaming cups of Bollywood entertainment on the very first day of the sizzling new season of the show. For viewing the show, you need to have a Disney+ Hotstar subscription. Soon, the trio will appear in ‘Rocky Aur Rani Ki Prem Kahani’ – a much-awaited movie of the year.