Rath Yatra, the most awaited festival of Odisha, is celebrated every year in a grand manner in Puri. Jagannath Rath Yatra 2022 will be celebrated on 1st July in Puri, according to the Shukla Paksha Dwitiya Tithi in the Hindu calendar. On this auspicious day, let us seek blessings of Lord Jagannath and learn some significant points about the famous festival.

On the day of Rath Yatra, Lord Jagannath, accompanied by his siblings Subhaddra and Balabhadra, comes out of their holy abode (the 12th century Puri shrine) through the Singha Dwara and together they ride to the Gundicha temple in their individual chariots. This is the only time of the year when the three deities leave the premises of the main temple and spend 8 days at the Gundicha temple. The devotees clean the Gundicha Temple in advance to ensure that the gods have a pleasant stay.

The chariots are pulled by thousands of devotees after performance of due rituals in the Shreemandira. Thousands of people from all parts of India visit Puri to participate in the historic Yatra.

As mentioned in the Panchang, Rath Yatra takes place on the Shukla Paksha’s Dwitiya Tithi. In 2022, Dwitiya Tithi commences on June 30 at 10: 49 am. As the sunrise of Dwitiya Tithi will occur on 1st July, people in India will celebrate Jagannath Rath Yatra 2022 on Friday. 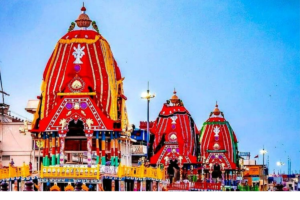 History and Importance of Rath Yatra 2022:

According to ancient Hindu mythology, Lord Jagannath comes out of the Puri Temple once a year to meet his devotees who aren’t allowed inside the temple. Another legend tells a different story in which Lord Jagannath visits the Gundicha temple annually to keep his promise made to queen Gundicha, the spouse of King Indradyumna.

Every year, Lord Jagannath, his brother and sister, go to the Gundicha Temple, 3km from the Jagannath Temple and stay there for a period of eight days. Devotees believe that on the fourth day after the commencement of the Rath Yatra, Goddess Laxmi arrives at the Gundicha Temple in quest of the Lord. On the ninth day, termed as the Bahuda Yatra, the deities return home in the same chariots pulled by a huge crowd.