After Akash Ambani’s succession, will Isha Ambani at 30 lead Reliance Retail in the future?

The owner of Reliance Industries, Mukesh Ambani, has three off-springs.  Isha and Akash are twins and Anant Ambani is the youngest of three siblings. As per reports, Mukesh Ambani may pass on the command of his retail business to his daughter, Isha Ambani. A formal declaration could come by the end of this week.

Reliance Group is one the biggest corporate houses in India. The process of handing over the reins of the business to the next generation has already started. As a starter, Mukesh Ambani resigned from Reliance Jio’s board and he made Akash Ambani the chairman of Reliance Jio Board. On 27th June, 2022, the company’s board of directors held a meeting in which the proposal of making Akash the chairman was raised. As the Board has approved the plan, Akash is the official non-executive director. Now there is a possibility that Isha Ambani will take charge of the retail business.

In the young generation: 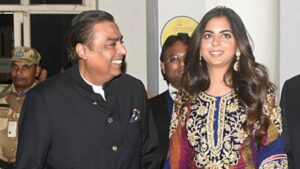 On the auspicious occasion of Dhirubhai Ambani’s birthday on Dec 28, 2021, Mukesh Ambani had announced that the young generation is wise enough to become leaders. So, he wanted to begin the course of succession by guiding the new generation, teaching and appreciating them. He further added that he feels proud to see the dedication and passion his children have for Reliance. He is convinced that just like his father who altered the lives of millions of people and worked tirelessly towards the development of the nation, his children also possess the ability and fire to influence the future growth of the company.

Other than the Ambani siblings, KV Chaudhary and Raminder Singh Gujral were appointed as additional directors to serve five years of tenure. The company has also chosen Pankaj Mohan Pawar as Reliance Jio’s managing director.