Meena, a famous face in the South Film Industry, mourns the untimely demise of her husband, Vidyasagar. He breathed his last on Monday night is a reputed hospital in Chennai. As per reports, COVID-19 complications led to his death at 48. The deceased was suffering from acute lung infection for a prolonged period and was undergoing treatment. He also had long-term kidney ailments and was supposed to get admitted for a kidney transplant operation in this year. Vidyasagar got covid infected in March, 2022, post which his health condition worsened.

Meena, who started her career as a child artist, soon rose to fame because of her extraordinary talent and zeal for acting. She reached the peak of her career in the late 90s and the initial years of 2000s, entertaining the audience with her enthralling performances in various films. Her late husband, on the other hand, was a successful businessman settled in Bengaluru.

Meena and Vidyasagar tied the knots in 2009 following traditional rituals and Nainika is their only daughter. She too is a star who made her debut in acting as the on-screen daughter of Thalapathy Vijay in ‘Theri’. Vidyasagar’s family is making arrangements for his cremation today (29th June, 2022) at 2 pm in Chennai’s Besant Nagar.

In her journey as an actress, Meena has shared the screen space with various leading male heroes of the South Indian Cinemas. Her most recent project was Drishyam, a film that garnered much appreciation from fans. Meena’s fans, colleagues and friends were all shocked to receive the sad news and offered their sincere consolations. 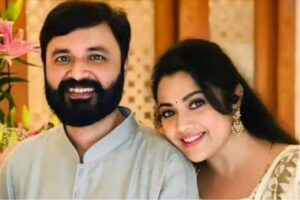 Sarath Kumar, one of Meena’s co-stars and a renowned actor, wrote, “…our family’s heartfelt condolences to Meena and the near and dear of her family, may his soul rest in peace.” We have also seen actor Venkatesh opposite Meena in many films and in the recently released Telegu version of the captivating movie, Drishyam. He wrote, “Extremely sad and shocked by the demise of Vidyasagar gaaru!”

Khusbhu Sundar also expressed her grief through a Twitter post: “Waking up to a terrible news…Heart goes out to Meena and her young daughter. Life is cruel.” Lakshmi Manchu also admitted being heartbroken on hearing the unfortunate news and conveyed her genuine sympathy.