Economist and philosopher, Amartya Sen expressed his concern about the miserable state of Hindu-Muslim fiasco in India. Sen reminded the people of India that the nation will progress only when Hindus and Muslims live and work in harmony.

Amartya Sen, a Bengal-born Noble Laureate from India, has expressed deep concern regarding the present state of affairs in India. Sen was the chief guest at the inauguration ceremony of a research center near Kolkata, named after him to pay tribute to Bengal’s great son. In the same event, the economist said that India’s current situation scares him and he believes that all should be afraid.

Sen asserted that India can never be a Hindu nation or a Muslim nation as it doesn’t define who we are. Unity in diversity is our strength and we must not forget it. In his words, “I want the country to be united. I don’t want division in a country that was historically liberal. We have to work together.”

Amartya Sen urged people to turn over the pages of history and remember that Christians, Jews and Parsis have all co-existed in the country for ages, such as the nature of India’s tolerance. But he also warned that only tolerance is not enough at this point. Even if the country has a deep-rooted value of being tolerant, the times are wild now as people need to work accordingly. Sen opined that the only solution is for Muslims and Hindus to work together.

He continued his discourse by speaking on the latest efforts made by certain sections of society to reclaim popular places of worship. He admitted that he didn’t think the Taj Mahal could be attributed to the Hindus. 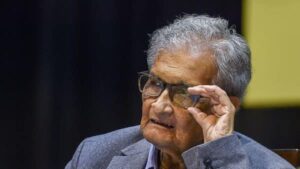 Amartya Sen also gave examples of people like Ali Akbar Khan and Dara Shikoh. Shah Jahan’s son, Dara Shikoh, translated as many as 50 Upanishads in Persian and his efforts enabled the entire world to learn about Hindu traditions, Hindu culture, and Hindu scriptures. The ‘ragas’ sung by Ali Akbar Khan is another instance of enlightened people in the past who could look beyond religious narrow-mindedness and create magic. These types of collaborative works are of utmost importance in India at present as simply talking about tolerance fails to address the perils of fragmentation.

The Indian judiciary and its laws

Amartya Sen also commented on the passive role played by the Indian judicial system, without taking active steps to curb dissent: “The Indian judiciary often overlooks the dangers of fragmentation, which is scary.” In Sen’s opinion, if we want to be secure, there has to be a balance between the legislature, the bureaucracy, and the judiciary” and it is regressive that even in the 21st century, people are put behind the bars with the help of hackneyed colonial laws.