Japan’s former prime minister Shinzo Abe succumbs to bullet wounds and died at the age of 67 on Friday in the city of Nara, as reported by local media. Shinzo Abe was shot at around 11.30 am (local time) as mentioned by Japan Chief Cabinet Secretary Hirokazu Matsuno. Earlier in the day, as Shinzo Abe collapsed after the attack while delivering a speech, he was taken to a hospital bleeding, local media reported.

Multiple shots were fired by attacker, Shinzo Abe was hit in left chest, one shot appeared to have hit his neck, TBS newtork said. Though the attacker has now been arrested.

“Abe was in severe condition, hoped Abe would survive,” Japanese PM Fumio Kishida had said earlier. Kishida added, “It is a despicable act of barbarity that occurred when an election, which is the basis of democracy, is being held and is totally unacceptable.”

Matsuno told a briefing, “Such an act of barbarity cannot be tolerated.”

An NHK reporter was present on the scene, he said they could hear two consecutive bangs during Abe’s speech.

Shinzo Abe become Japan’s longest-serving premier by serving two terms as prime minister. Later on, he had stepped down citing ill health in 2020.

Prime Minister Narendra Modi, reacting to his death, declared one day of national mourning on Saturday, July 9. He said, “Shocked and saddened beyond words at tragic demise of one of my dearest friends, Shinzo Abe. He was a towering global statesman, outstanding leader and a remarkable administrator. He dedicated his life to make Japan and the world a better place.” “My association with Mr. Abe goes back many years. I had got to know him during my tenure as Gujarat CM and our friendship continued after I became PM. His sharp insights on economy and global affairs always made a deep impression on me,” PM Modi added.”Mr Abe made an immense contribution to elevating India-Japan relations to the level of a Special Strategic and Global Partnership. Today, the whole of India mourns with Japan and we stand in solidarity with our Japanese brothers and sisters in this difficult moment,” the Prime Minister added.

Other world leaders have also expressed their sadness on the attack on former prime minister Shinzo Abe.

Singapore Prime Minister Lee Hsien Loong termed the act as a “senseless act of violence.” He added “Mr. Abe is a good friend of Singapore. I had just hosted him to lunch in May, on my visit to Tokyo. My thoughts and prayers are with Mr. Abe and his family.” 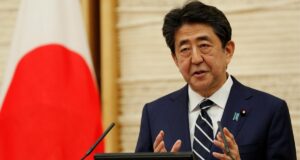 Ex US President Donald Trump said that the attack on Abe was devastating. He described Abe as a truly great man and leader, and added “he was a true friend of mine and, much more importantly, America. This is a tremendous blow to the wonderful people of Japan, who loved and admired him so much. We are all praying for Shinzo and his beautiful family! Trump said on the social media.

Philippine Foreign Secretary Enrique Manalo said he listened the news with great shock and dismay. He added, “I extend my deep sympathy and pray for his early recovery.”

Malaysian Foreign Minister Saifuddin Abdullah said he was saddened and shocked of the news of the attack on the former Japanese leader.