Join Our Telegram Channel
HomeLatest NewsEV prices to be on per with petrol vehicles by coming year:...
Latest News

EV prices to be on per with petrol vehicles by coming year: Nitin Gadkari

Nitin Gadkari in a press conference on Thursday has asserted that electric vehicles’ costs in India will soon be as affordable as all petrol automobiles. EV prices to be on per with petrol vehicles by coming year, he said.

Want to purchase an electric car to cut down on fuel expense? But can’t afford a good electric car because the price is twice as much as a conventional engine car? Soon you too will be able to embrace an eco-friendly lifestyle as the prices of electric vehicles are about to come down. Nitin Gadkari, the Road Transport Highways Minister of India, has assured the same in a recent media event. 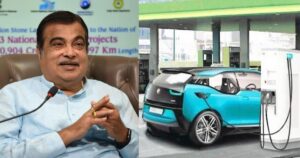 In Gadkari’s words, the govt. is urging people to replace diesel and petrol with ethanol derived from crop residue. The Minister also pointed out that as modes of transportation waterways are comparatively cheaper than roadways. At present, companies depend primarily on the railway network for transporting heavy goods across the nation. As it is cost-effective, the government also has big plans on making waterways more useful as a mode of transport in the coming years.